The Underworld is the kingdom ruled by Hades. Like Olympus, it is a modern day metropolitan city. There are numerous tall buildings, empty roads, and billboards that say, "Congratulations, You're Dead!" Unlike Olympus, it is always dark out. Hades explains this is because he doesn't want that "shitty-little-sun-god" in the Underworld.

Deities that reside in the Underworld are known as cthonic deities, as established by Apollo's dergoratory comments toward Thanatos.

Locations in the Underworld[edit | edit source]

Hades and his seven dogs live in a large, modern townhouse.

Persephone wakes up in a large bed in Hades' guestroom, which has a tapestry of Cerberus on the wall.

The house has large walls, double doors, large staircases, walls of windows, a balcony, a giant library, a collection of helmets, open walkways, a large indoor pool, and a kitchen with an espresso machine. The bathroom in Hades' master suite has a waterfall shower head and large glass doors.

The garage is large enough to hold many cars. There is a hedge on the outside of the walkway between the house and garage where Alex hid to take a picture of Hades & Persephone. 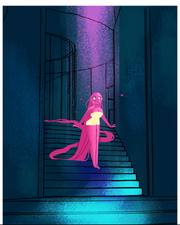 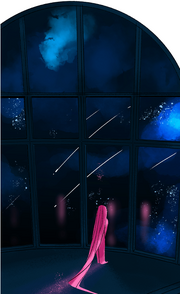 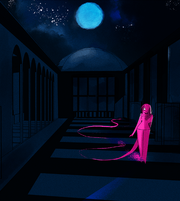 A hallway leading to one of the guest rooms.

The front entrance to Hades' house. 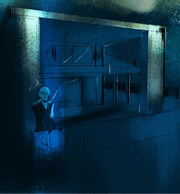 The garage with several of Hades' cars. 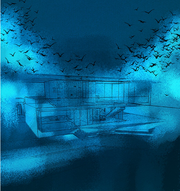 Hades' home seen from outside. 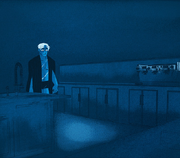 Hades' bedroom.
Add a photo to this gallery

Minthe lives in a high-rise apartment building. The apartment was a gift from Hades. 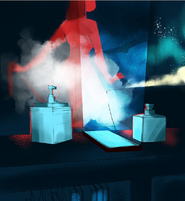 The kitchen of Minthe's apartment. 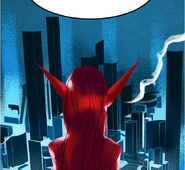 The view from Minthe's apartment. 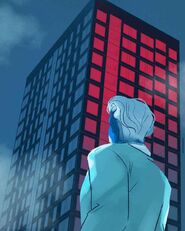 The building from outside. 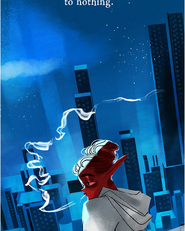 Minthe's balcony.
Add a photo to this gallery 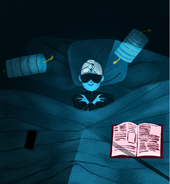 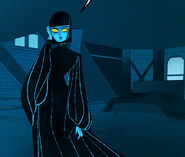 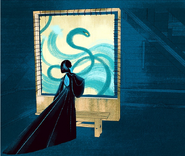 Hecate's textile art stand.
Add a photo to this gallery

Underworld Corp. is the corporation run by Hades. Its main role is to collect, organize, train and employ mortal souls (shades) that have died. It is assumed that almost everyone who works at the company also lives in the Underworld, except for one intern per year from Olympus.

Most shades do entry level factory work, because Hades prefers the financial benefits of ongoing, unpaid labor over a fearless army of the dead.

Hades sends Russell and Cordon Bleu to doggy daycare when he goes to work, because they cannot be trusted in the house.

Aphrodite sent her pet to the daycare once but was chased by Hades for the prank she pulled on Persephone.

Hecate finds the copy of the tabloid on her way to work, with a picture of Hades and Persephone leaving Hades' house. The Weekly Nark says, "Nameless flower nymph was seen leaving the King of the Underworld's Townhouse, Early Sunday Morning" and "Sleeping her way to the top!"

There is a train station, where Thanatos shoves Persephone out of the way on her first day getting to work, before he knew who she was.

Hades tells The Furies to take whoever took the photo from the Weekly Nark to the abandoned ice cream factory downtown after roughing them up a little. Hecate and Hades head there to "speak with" Alex about his crimes against the Underworld. Under clause 1-B of the Olympus/Underworld peace treaty, Hades can punish Alex as he sees fit. The last time we see Alex, Hades has his finger to his eyeball saying, "An eye for an eye!" 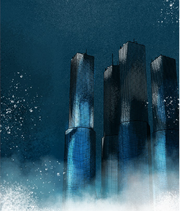 Add a photo to this gallery
Retrieved from "https://lore-olympus.fandom.com/wiki/Underworld?oldid=5442"
Community content is available under CC-BY-SA unless otherwise noted.