Rachel Smythe is a comic artist and folklorist based out of Wellington, New Zealand [4]. She is the creator of the widely-successful, international, web comic Lore Olympus; a modern-day deconstruction of the classic Greek myth, The Abduction of Persephone. Rachel Smythe has worked full time on Lore Olympus at Webtoon Entertainment Inc. since March 2018 [3]. She interacts with fans of her work by reposting their artwork and cosplay on her Instagram and Twitter, and attending comic conventions.

Rachel Smythe has been producing artwork and posting it online since roughly 2004 [11]. She graduated from Whangunui School of Design (Whangunui, NZ) with a Bachelor’s degree of Computer Graphics and Design (2005-2007) [3]. Interest in her projects has fluctuated since she started posting art online, and Rachel has said that there was so little interest “at the start of 2017, I could not pay people to look at my artwork.”[11] Launched in 2018, Lore Olympus has been Rachel’s most popular project to date, with over 4.8 million regular readers worldwide. She has explained that the built-in audience on Webtoons “helped a lot” when it came to building a fan following of her work[8]. She has been grateful for her experience with Webtoons saying in 2018, “as an artist [the people at webtoons] really look out for you, and I can say they are such a great company to work with. You know, it’s just been one of the best years of my life working with them this year.”[11] While illustrating Lore Olympus, Rachel Smythe intentionally relies on colour and lighting to create atmosphere [11]. Over the years she has used many art styles, her mindset is that “establishing a style is ongoing as long as you’re creating art.”[15] Regarding her medium, Rachel has said “what really drove me to make comics in the first place is I really wanted to be a director, but like being a woman in my 30’s, based in New Zealand, who had trained to be a graphic designer was kind of unrealistic to retrain to be a director. But when you’re making a comic, it is kind of like being a director in a lot of ways; like you pick everything that goes in it, and the flow of it, and what everyone’s wearing, and decide how everything looks.” [7]

The tools and programs that Ms. Smythe uses while creating Lore Olympus are [1]:

Rachel Smythe started Lore Olympus in May 2017 [11]. She has said she “basically started it out for fun.”[11] It launched on featured on March 4th 2018. Creating Lore Olympus is her full time job. [6] In August 2019, Rachel opened up about working around 60-70 hours per week on Lore Olympus. [1] Her workdays are Monday to Saturday, with Sunday as rest day for herself. She uses the Pomodoro time management technique during workdays, and stretches during longer breaks. [6] The story beats for Lore Olympus are planned by Rachel one to two years in advance and fine-tuned with her editor. [1] Ms. Smythe says she “reckons” Lore Olympus will total 3 seasons. [7] The art in episodes 1-30 was done completely by Ms. Smythe. Following that, some of the flats and inking have been worked on by additional artists in order to “to increase the quality of the comic and also quality of life for [Rachel].” [7] This also serves as a support system, as Rachel has explained “In the future when I have events and things, or life, happening to me, I know that I can have a team to help me out when I need.” [7] When asked about the hardest scene she has drawn, Rachel has said it was chapter 24. [10] Although the scene had disturbing content, she felt called to include it in the story for a greater good.

“It needs to be educational for people and it needs to help. That’s the main thing, I was like I have to help people with this.” [10]

“Who do you know that hasn’t been sexually assaulted? The number is depressingly low, right? Why is that?

There is no short answer or an easy fix. I have a platform. I can tell a story that will hopefully educate and help others feel acknowledged and vindicated.” [9]

Talking a bit on Lore Olympus she has said:

“This is a deconstruction.[…]So it’s basically looking at particular genres, and kind of twisting them a little bit. So I’ve kinda got like the monster-boyfriend genre and there’s a plotline at the moment where like Hades is much older than Persephone and, you know, it’s a little like “eugh”, kinda thing! This is something that we see in movies and stories a lot. It’s like you’ll have the female character, and then you’ll have the male character who is very old and wise, and they’re like “I know so much more than you because I’m very very old” Haha! So it’s looking at the framing of those sorts of cultural tropes, and twisting it up a little and observing it, and kind of having a bit of a laugh with everyone. Especially with my character Persephone, she’s a very soft protagonist. I basically designed her in such a way that I wanted her to be relatable for people, especially young women, because I feel like there’s a lot of media where they have a “strong female character” and they’re really good at doing backflips and stabbing people and saving everyone from totalitarian societies and things, and it’s really cool and there’s definitely a place for that, and it’s super important. But also I think we need representation for softer people, who their idea of having a breakthrough is just verbally learning how to stand up for themselves. Things like that. Just little relatable things.” [11]

Rachel Smythe is 30-something from Aotearoa, currently residing in Wellington New Zealand. [1] Since 2007, she has worked as a freelance designer/illustrator and she has been posting online since 2002. [3][11] Rachel admits that she is “quite sensitive” and that she doesn’t read the Webtoons comments very often. [7][9] On this decision she said “Sometimes I think it’s better to just focus on making the work. Like I said, sometimes, yeah, I’m missing out on those comments from people who are really nice; but my way of repaying them is taking time to make them really good content to read later.”[11] Sometimes if a large number of people on her Patreon have requested something similar she has kept it in mind, but otherwise Rachel has tried to craft Lore Olympus without outside influence, because as she has said “I’m the one that has to stand by my work at the end of the day, and articulate why I did what. And I’d like to make my own choices for myself.” [11] Rachel has opened up about writing Lore Olympus with dyslexia, ADHD, and anxiety on her Twitter. [2] She also posts in support of the Black Lives Matter movement. [1] She has attended Chromacon in Auckland New Zealand as well as L.A. Comic Con as a creator for several years. [1] Rachel has said before that creating Lore Olympus is “[her] dream job.” [10] Practicing gratitude has helped her cope with the difficulties that come with her work. [10] Some of Rachel’s likes include skin care, manicures, cartoons, movies, podcasts, folklore, snacks, and coffee. [1][2][9] Advice she gave to anyone starting out in comic creation: “just do it.” [8]

The Mike Wieringo Comic Book Industry Awards is an annual celebration of the creativity, skill and fun of comics. The nomination ballot is determined by fans and pros alike.

The nominations in each category are generated by a five- to a six-member jury, then voted on by comic book professionals and presented at the annual San Diego Comic-Con held in July, usually on Friday night. The jury often consists of at least one comics retailer, one librarian (since 2005), and one academic researcher, among other comics experts.

You can buy Lore Olympus Prints and Merch at: 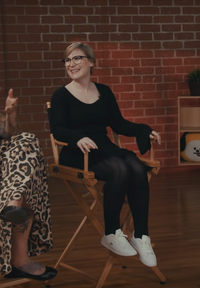 Retrieved from "https://lore-olympus.fandom.com/wiki/Rachel_Smythe?oldid=7930"
Community content is available under CC-BY-SA unless otherwise noted.