Has feelings for Eros

Purple and Gold (as a Nymph)

Psyche is a young princess from the Mortal Realm. Psyche lived an unhappy life there before Eros took her away. Currently, on Olympus, she serves as a handmaiden to Aphrodite disguised as a Nymph called Ampelus.

In her original form as a human, Psyche has brown skin, long brown hair, and dark gold eyes. She wears white togas and gold jewelry.

When Psyche becomes Aphrodite's handmaiden, she is made to wear a disguise as a nymph as mortals are not allowed on Olympus. In her disguise, she has dark purple skin and indigo hair with pointed ears. Her eyes remain gold, although they become brighter.

In both appearances, she has golden piercings.

Psyche is kind and inquisitive, but easily influenced by others to her detriment. In the Mortal Realm, Psyche was resigned to her predetermined role, as any objections typically led to physical punishments. Although others believed her beauty had afforded her a better place in life, in reality it had done her no favors. Because of this, Psyche was melancholy and was easily manipulated into doing things out of fear of being a disappointment or to prevent herself from getting hurt. When Eros takes her to Olympus, she quickly falls in love with him, as he is the only one who treats her like a person. It is only with Eros that Psyche is able to ask for what she wants and starts to become more outspoken. However, she still shows that she has the ability to be coerced by others when her sisters manipulate her into "protecting" herself from Eros.

She has a tendency to seek other people's approval due to her mother and sister's cruel treatment. When disguised as the nymph Ampelus, she is shown to have an affinity with children when she interacts kindly with Ludus.

Psyche was considered the most beautiful mortal on earth. Upon hearing this, Aphrodite gave Eros the task to make her fall in love with the ugliest creature in the world. Upon seeing Psyche, and realizing how she was treated in the mortal realm, Eros takes pity on her and subsequently falls in love. To save her from being forced to marry an abusive older man, he illegally takes her to Olympus.

The two begin a loving relationship: he teaches her to read and write, and treats her with kindness. In return, Psyche genuinely loves Eros because he treats her with respect and sees her as a person. However, Psyche begins to feel disillusioned by the affair; she misses her sisters, and does not truly know who Eros is because he keeps his identity hidden from her. Most of all, Psyche wants to leave the apartment and see the rest of Olympus, and does not understand why Eros does not let her leave. When Eros eventually allows Psyche to have her sisters over, they manipulate her into believing that Eros is a monster and she should kill him for her freedom. Eros catches her before she can cause him harm, ultimately ruining their relationship. He refuses to listen to her explanation and leaves her sobbing in their apartment, to be later found by Aphrodite.

He is oblivious to the fact that Aphrodite has disguised Psyche as the nymph Ampelus, and interacts with her unaware of her true identity.

Psyche was considered the most beautiful mortal on earth, which Aphrodite perceived as a challenge to her own beauty. In response, Aphrodite gave Eros the task to make her fall in love with the ugliest creature he could find.

However, upon seeing Psyche and seeing how she was suffering on earth, Eros fell in love with her instead and took her to Olympus to save her from his mother. After Eros abandoned Psyche when she broke his heart, Aphrodite went to the house Eros kept her in and eventually found her crying. After getting Psyche to summarize her story, Aphrodite takes pity on her and decides to disguise her as a nymph and keep her on Olympus to see how much Eros really loves her.

While on Olympus, Psyche acts as her handmaiden and often follows her around. The two seem to get along and have developed something of a friendship, despite Aphrodite's earlier animosity.

In her first appearance she calls Psyche her "lovely daughter," but when Psyche shows reluctance at being married off, she slaps her and berates her for disrespecting her father's decisions. She is quickly revealed to be a bitter, hateful woman who is jealous of her daughter's beauty, pushing to have her married off quickly. She didn't show concern when Psyche's future husband was already showing signs of cruelty. Eros even stated that her mother is a "cold bitch." It is unknown what happened to her after her daughter was taken or if she is worried about Psyche.

Like their mother, they appear to be jealous of Psyche's beauty. Even though Psyche missed them enough to persuade Eros to let them visit her on Olympus, they show no gratitude towards her or seem glad that Psyche is happy. Rather, they comment on her learning to read and write as a negative trait and make her self-conscious. They also convince her that Eros may not be what he seems and give her a dagger to "protect herself," ultimately causing the events that lead to Eros and Psyche's separation. Presumably they returned to the Mortal Realm, although it is unknown if they worry about Psyche. 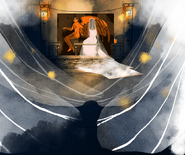 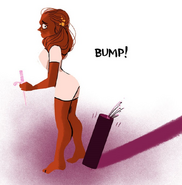 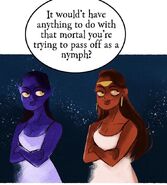 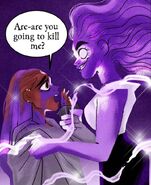 Aphrodite disguising Psyche as a nymph.

Psyche as a nymph. 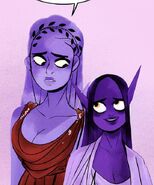 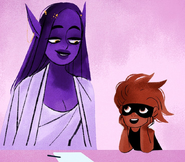 Psyche flying on Eros' back. 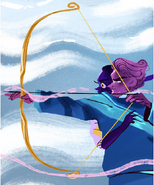 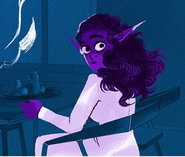 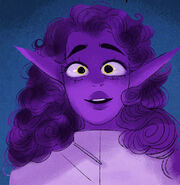 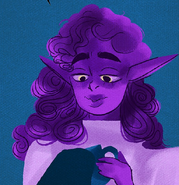 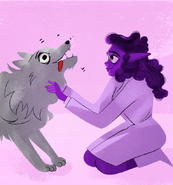 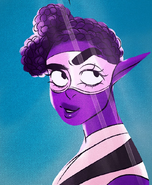 "You truly are a ridiculous man."
Add a photo to this gallery
Retrieved from "https://lore-olympus.fandom.com/wiki/Psyche?oldid=8086"
Community content is available under CC-BY-SA unless otherwise noted.