"Just be the bitch. That's what everyone expects anyway." ― Minthe to herself, Episode 46

A river Nymph from the underworld

Minthe is a river nymph from the Underworld, a secretary at Underworld Corp, and Hades' personal assistant.

Minthe is a nymph with scarlet red skin and darker, straight red hair. She has long, pointed ears that protrude through her hair. She is fairly tall and has a slim figure. She typically wears black or dark red clothing and lingerie in most of her appearances.

When showing strong emotions, such as after a breakup, her hair appears to melt and becomes gooey and watery, hinting at her origins as a river nymph.

Minthe has a very self destructive personality. She is very insecure and self conscious. As a result, she is unable to handle any kindness given to her, acting hostile and distant to those who would otherwise care for her. After she tries to distance herself from Hades and he began to show interest in Persephone, Minthe begins to recognize the repercussions of her actions and feels real jealousy. Despite wanting to improve herself, she still struggles with the pressures of commitment and acknowledging her insecurities.

Minthe can be convinced or manipulated easily by others who are close to her, such as Thetis. Minthe can also be a manipulator herself, especially towards Hades, who she often verbally abuses.

Minthe desperately wants to improve and become a better person, unable to understand why she acts the way she does, but continually falls back into her old habits.

The plot begins with Hades and Minthe already sharing a toxic relationship with one another. The two are known to frequently argue, which can often devolve into them breaking things off until they eventually get back together. Despite their quarrels, Hades has shown to deeply care for Minthe, buying her expensive gifts and paying for her rent. Minthe also appears to care for Hades in her own way, although her commitment issues and insecurities have caused her to become quite abusive towards him.

When Minthe was invited to the Panathenaea party, she chose not to accompany Hades and instead told him she didn't feel like being seen in public with him. It is later revealed the real reason was because she discovered the ring Hades was planning on using to propose to her. Fearing that she wouldn't make a good Queen and that she is hated by Hades' family, she instead chooses to distance herself from Hades to change his mind.

When her behavior instead causes Hades to drift away from her and spend time with Persephone, Minthe gets flustered and jealous, indicating her insecurity and low self-worth. She shows up to Hades' home and begs him to continue their relationship, claiming that they are meant to be "messed up together."

When Hades decides to once again try a relationship with Minthe, she agrees in the hope of becoming a better person and girlfriend. However, due to the interference of a jealous Thetis, Minthe once again disappoints Hades by failing to show up to a dinner that she suggested they have. Minthe's insecurity over this incident causes her to blow up at Hades at work, verbally and even physically abusing him by claiming he looks like his father, Cronus, and then striking him. Minthe is later appalled at her own actions and is desperate to apologize, not understanding why she acts this way. Despite her desire for another reconciliation, Hades decides to end their relationship for good, allowing her to keep her job and apartment out of goodwill. In response, Minthe turns to manipulative tactics, claiming that Persephone will not want Hades, as he is still just as messed up as her, and that Hades will soon come back like he always does.

Minthe and Thetis have a toxic friendship. Minthe often seeks out Thetis for advice and comfort, and while she often provides it, Thetis will also attempt to undermine Minthe if she is engaging in progress in having a healthy relationship with Hades. This is because Thetis is jealous of Minthe‘s official relationship status with Hades, as her own relationship with Zeus will never work because he is married to Hera. When Thetis found out Minthe would be having dinner with Hades, she decided to prevent Minthe from going by taking her out for drinks beforehand and getting her too drunk.

Despite Minthe easily trusting Thetis in the past, she eventually stood her ground and tried to cut her off after realizing Hades was right when he told her Thetis was not her friend.

Thetis, Minthe, and Thanatos all share a group chat called the "Snarky Chat", where they comment on other people's appearances.

Thanatos and Minthe are coworkers at Underworld Corp. Occasionally, they would hook up with each other, typically meeting in a storage room when one's workday was going poorly. After Minthe started an "official" relationship with Hades, she stopped accepting Thanatos' advances, but continued to lightly flirt with him. They both share a skepticism towards Persephone, mainly concerning her sudden job placement at Underworld corps, although Minthe's maybe more fueled by jealousy over Hades and Thanatos' by resentment at his job.

Thanatos has feelings for Minthe, however it's unknown if Minthe reciprocates it. Thanatos doesn't appear to approve of Minthe and Hades being together. He seems to care about Minthe, as he comes to her apartment while she is suspended and brings her food, and later agrees to snoop for dirt on Persephone for Minthe's sake.

Thetis, Minthe, and Thanatos all share a group chat called the "Snarky Chat".

Hecate is Minthe's superior. Minthe shows high respect, bordering on fear, for Hecate. She quickly gets her act together when prompted to by Hectate, and will begrudgingly do things if Hectate asks. Hecate is patient towards Minthe and was willing to help her out in the past. However, after Minthe's outburst, Hecate finds Minthe's actions towards Hades deplorable and temporarily suspends her from her job.

According to Minthe, Hades' family isn't fond of her, especially Hera. This is a source of insecurity for Minthe, and she often worries about how she is perceived by his family. When faced with the idea of becoming Queen of the Underworld, Minthe imagines agonizing family affairs and Hera talking badly about her behind her back. Hera shows disdain for Minthe, believing Hades can do better and even calling her a harlot.

Minthe is jealous of Persephone's connection with Hades and as a result, is vindictive and rude towards her. On Persephone's first day at Underworld Corp, Minthe gave her directions that ended up being a ruse that led her to a restricted area where she was put in danger. Minthe comes to regret her actions, especially after learning who Persephone really is, but doesn't fess up to them. When Hades and Minthe start an "official" relationship, she continually rubs it in Persephone's face by kissing Hades in front of her and talking about all the great things he does for her. Despite her behavior, Persephone is continually respectful of Minthe and Hades' relationship, even setting boundaries with Hades for Minthe's sake. Persephone also does not reveal that Minthe was the reason she ended up in Tartarus, out of concern for the repercussions Minthe would face. 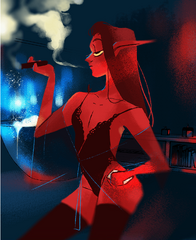 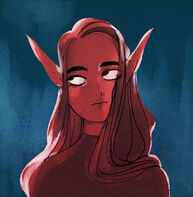 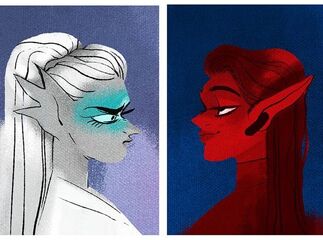 Minthe on the phone with Thetis. 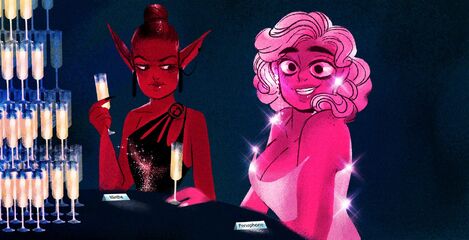 Official art of Persephone and Minthe 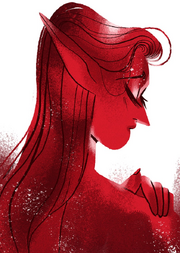 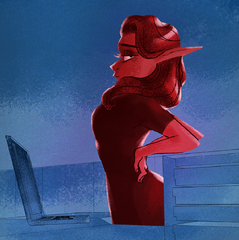 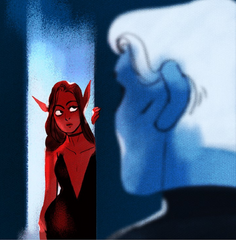 How Persephone imagines Hades and Minthe 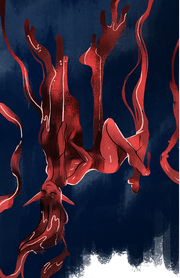 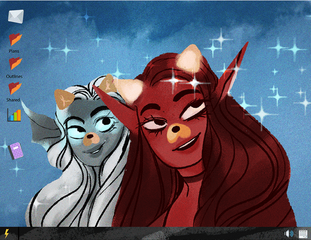 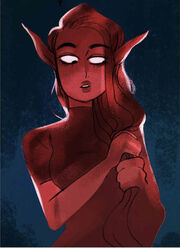 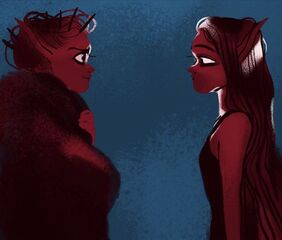 Minthe seeing her fear of becoming Queen of the Underworld 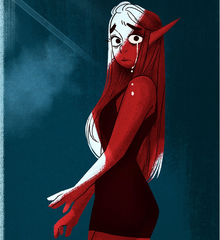 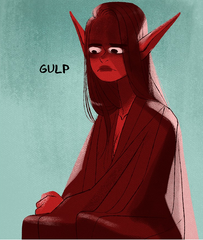 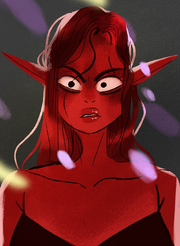 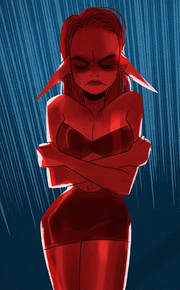 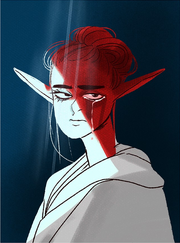 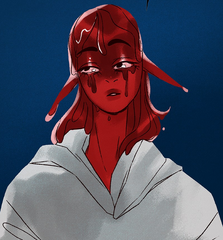 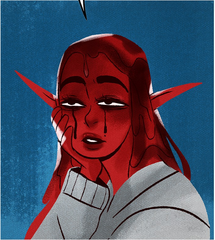 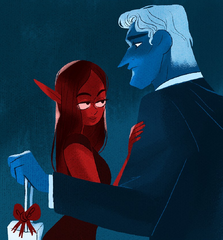 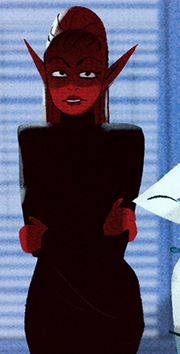 Minthe in a high ponytail. 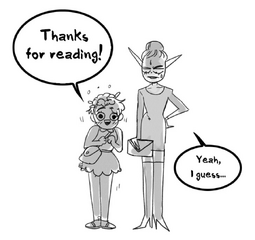 Persephone and Minthe together at a end of some episodes/chapters.
Add a photo to this gallery

Retrieved from "https://lore-olympus.fandom.com/wiki/Minthe?oldid=5466"
Community content is available under CC-BY-SA unless otherwise noted.