Greatest Tyrant Ever Known (by Minthe)

Hera ("Romance"/Plot by Zeus and Hera)

♂ Male
Kronos is the Titan god of Time, the husband of Rhea, and the father of Hades, Poseidon, and Zeus. Kronos was said to be the most feared tyrant in the cosmos but was dethroned by his children when they lead a rebellion against the Titans known as the Titanomachy. After his defeat he was imprisoned in Tartarus.

His flashback debut occurs in Episode 25.

Kronos' skin and hair resembles the night sky, appearing black or dark blue and having speckles of white and light blue across it. His hair is long and wild, appearing to float of its own accord. When enraged, Kronos's blue features turn red and his mouth becomes larger and jagged. He is shown to have a pointed nose, a trait he shares with two of his sons, Hades and Zeus. In his only appearance, Kronos is shirtless and appears to wear a wrap around his waist.

While not much is known about him, he was said to be a tyrant by all the Gods, and was feared by mortals and immortals alike. Hades believes there was a time when Kronos was kind and compassionate as he saw how happy his parents were together but Kronos lost this side of himself over time due to Gaia’s prophecy.

Kronos, like his father, is power-hungry and obsessed with control, as despite his genuine love for his wife Rhea, he mainly married her so that he could use her power as a fertility goddess to overthrow his father Ouranos. Kronos’s obsession with power and maintaining his tyrannical rule drove him insane and he became paranoid due to a prophecy that stated his children would be his downfall. As a result, he ate his children one by one without hesitation or remorse to prevent the prophecy from happening, showing he cared more for power than his own sons. He did not realize his actions towards his children are what caused the prophecy to come true.

Rhea is the Titan Goddess of Motherhood and Kronos' wife. While he genuinely loved Rhea, Kronos married Rhea so that he could use her power to rule the cosmos. Despite everyone’s protests, Rhea also wanted to be with Kronos as she saw the good in him that no one else did. He's shown to love her dearly, but their relationship became strained due to his paranoia of the prophecy of their children destroying him. Despite not wanting children, Kronos sired three sons with Rhea, allowing her to keep them for short periods of time. Rhea tried protecting Hades and their other children from Kronos, continually lying to him for their sakes and hiding them when he came near. Kronos remarked that motherhood had made her weak. He ate a frightened Hades in front of Rhea, not caring that his actions clearly hurt her. It's unknown what role Rhea played, if any, in the war against Kronos or if she was aware of his “relationship” with Hera.

Hera is Kronos's daughter-in-law and once thought to be his lover. During the war, Zeus and Hera came up with a plan where Hera would seduce Kronos and slowly poison him over time. This plan was greatly disapproved by everyone, especially Hera's Mother Metis and Hades. After Kronos discovered her deception, he would find her on the battlefield and rip her in half. Her sacrificed allowed his sons and others to defect him. Hera was greatly traumatized by these events and took her many years to recover. Many looked down on the plan that deceived Kronos and resulted in Hera being given the name "The Golden Traitor,” a name that has followed her throughout the years.

In the present day, Hera is stilled traumatized by Kronos and has stared at herself in the mirror, feeling the scar he gave her. One night, Hera remembers talking to Hades as he was pleading with her not to go through with the plan. She screams how she chose to go through with the plan but hearing Kronos's voice causes her to freeze in fear. He then grabs her and tells her that he can see her. She wakes up, screaming and crying in pain which causes Zeus to run in and take her to the shower to calm her down. The two are in shock when her wound suddenly reopens years after the war.

Born as Aidoneus, Hades is Kronos and Rhea's firstborn son. Out of the three sons, Hades was the most affected and traumatized by him. On Hades' 6th birthday, he was ripped him away from Rhea, whom he was very close to and loved very much. As a result Hades was left alone for 13 years within Kronos who would verbally abuse Hades while trapped inside him. When Hades was set free by Zeus, Kronos attempted to keep Hades by biting him leaving the multiple scars on his body. When Zeus and Hera came up with a plan to bring down Kronos, Hades was greatly against it as it involved Hera pretending to in love with him in order to poison him slowly over time. After Kronos discovered this plan, he would grab Hera and rip her in half but because of her sacrificed, the 6 Traitors Dynasty were able to defeat Kronos. Now defeated and weaken, Kronos' three sons would become kings and Zeus would give Hades the "prize" of overseeing Kronos' imprisonment as he was the one who suffered the most by his hands.

In the present day, Kronos is now in Tartarus and Hades is still haunted by his father. He often has nightmares about the day Kronos consumed him. His last nightmare involved watching him eat Persephone. When using his powers, Hades greatly resembles Kronos as his skin and hair take on alternate colors. This is a source of great insecurity for Hades and was used against him by his ex-girlfriend Minthe.

Poseidon is Kronos and Rhea's middle child. Rhea told Kronos that Poseidon was simply "a very ugly bird" to prevent him from consuming him. However, like Hades, he was eventually eaten but kept separated from each other. When Zeus frees him and Hades, he joins the war to take down Kronos for his crimes. Like Hades and other members of the 6 Traitors Dynasty, Poseidon received a scar, across his left eye, from his Father.

Zeus is Kronos and Rhea's youngest son. After Kronos ate Hades and Poseidon in front of Rhea, she couldn't bear for her newborn son Zeus to suffer the same fate. She was told to switch Zeus with a boulder to trick Kronos, so that Zeus would be safe and grow up to free his brothers. Eventually he led the war effort against Kronos. Hera, Zeus' girlfriend and future wife, was the most desirable woman at the time and because of this, he would use Hera to seduce Kronos and poison him over time but the plan worked too well for his liking. After the war was done, Zeus "rewarded" Hades with Kronos.

Kronos was the son of the primordial gods Ouranos and Gaia, the first rulers of the cosmos. Kronos however desired to rule the cosmos himself and formed a union with the Titan Rhea. With the help of her powers Kronos was able to overthrow Ouranos, gaining a reputation as a tyrannical ruler. Gaia however warned Kronos that he would sire a child that would one day overthrow him. In an attempt to thwart this prophecy, Kronos devoured his children Hades & Poseidon before they could oppose his rule. His wife Rhea managed to save her youngest son Zeus from Kronos’s imprisonment by replacing him with a boulder. Zeus, years later, managed to free his captive brothers from their father.

After their recovery and with the assistance of the daughters of Metis, the sons of Kronos led a rebellion against Kronos and the other Titans known as the Titanomachy. Kronos, was defeated by his children (fulfilling Gaia’s prophecy) and imprisoned within Tartarus. After his defeat his kingdom was split between his sons.

Kronos makes a physical appearance in episode 148 of Lore Olympus, imprisoned within the depths of Tartarus but in a skeletal state and in chains. However, he immediately awakens by the droplets of divine power from the roots of Persephone's tree, that was left behind when she was on the run from Zeus, intrigued and surprised. 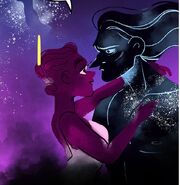 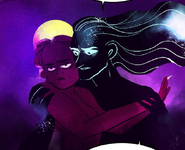 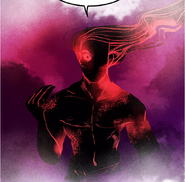 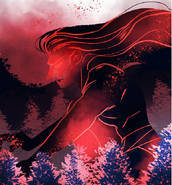 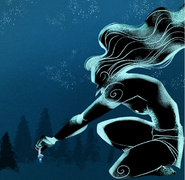 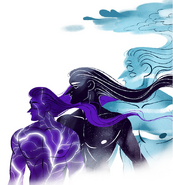 Kronos as he appears in Hades' dream.

Kronos as he currently appears in Tartarus.

Community content is available under CC-BY-SA unless otherwise noted.