Goddess of Marriage and Women

Queen of the Gods

Hera is the Goddess of Marriage and the Queen of Olympus. She is the wife of Zeus and the mother of Ares, Hebe, and Hephaestus. She is a member of the 6 Traitors Dynasty.

Hera is a goddess with golden hair and skin. She typically wears her long hair down, but will occasionally wear it up. She has dark blue eyes and a beauty mark below her left eye. She has a large X-shaped scar on her stomach.

Hera's wardrobe varies, and includes modern outfits and 1920s inspired clothing in multiple shades. Hera usually wears clothing that is white or dark blue, but has outfits that are red and green as well. At times, her body shimmers like actual gold. She is sometimes shown smoking a cigarette.

Hera is strong-willed and empathetic, however, she does appear to have a bit of a temper. Her empathetic nature is best seen when she is able to sense that someone is suffering and she begins to tear up in response. When she later discovers that it was Persephone she sensed, she is shocked and deeply saddened and becomes determined to figure out who hurt her. She also comes to comfort Hades after hearing about Minthe's actions, and it is revealed Hera helped care for him when he was injured in the past (presumably after getting eaten by Cronus.) Her caring side seems to be reserved only for those she likes, however, and all others get to see her as stubborn and resolute in her ideals. She butts heads often with Zeus, and his actions have often caused her to do destructive things, such as burn his portrait in retribution and punish Aphrodite and Eros after he claimed they were the reason for his infidelity.

Zeus is Hera's husband. According to Hades, Zeus "chose" Hera after their war with the Titans, preventing the other Gods from pursuing a relationship with her. It appears they had a good relationship in the past, based on their apparent happiness in portraits. In the current day, however, their relationship has become tumultuous. They fight constantly over each other's decisions, and Hera resents Zeus due to his affairs and womanizing behavior. Hera is also frustrated that Zeus consistently dismisses her suspicions about Apollo causing Persephone harm.

Despite this, Zeus is unwilling to leave Hera for one of his mistresses, and Hera appears to put up with Zeus' infidelity to a certain point. This appears to indicate they still care for each other on some level. Even with the animosity between them, they have also been seen getting along and having fun together, such as when they excitedly spied on Hades and Persephone from their balcony.

Zeus has revealed to Hades that he knows he's a bad husband and truly does love Hera. However, their relationship became more tumultuous after Hera finds out an arrest warrant has been issued for both her sister and niece and scolds Zeus for that reason and goes for a walk alone.

Hades is Hera's brother-in-law and former fling. They get along very well, though as Hebe points out, she may sometimes take her frustrations with Zeus out on Hades. When she learns of her brother-in-law's attraction to Persephone, she initially disapproves, but after some consideration, she decides to secretly test him to see if he is suitable for Persephone. When Hades passes, Hera decides to encourage and support the relationship.

It is revealed that before the war against the Titans, Hera and Hades had mutual feelings for each other, and were apparently in a relationship that came to an end because of Zeus. Even so, it's implied that she still held a candle for Hades even after centuries had passed. Because of Zeus' constant infidelity, Hera, in retaliation, had a long-term sexual affair with Hades. They ultimately ended the affair during the "80's" (most likely sometime before Hades met Minthe).

Hera has known Persephone since she was a child. Hera was taken with her after she told her she was beautiful, and Hera likewise left an impression on young Persephone. When Persephone comes to Olympus, Hera seeks to

protect her after hearing about Hades' attraction to her, admonishing him for saying lewd things about someone so young and impressionable. However, when she comes to realize that Hades and Persephone are mutually attracted to each other, and after Hades passes her "test," she decides to encourage and support their relationship. She is the one who signs on Persephone's internship in the Underworld with the intent of getting them closer.

When Hera holds hands with Persephone and inadvertently feels her trauma over being raped, she is devastated and becomes determined to find out who hurt her, showing she deeply cares about Persephone and her mental well-being. Later on, Hera visits both her niece and Hades in the Underworld and talks with the Goddess of Spring alone to gather more evidence on what Apollo did to her. She successfully gets her son, Hephaestus to get rid of the blackmail photos of her niece after giving him the SIM card.

She has an extreme disdain for the river nymph and disapproves of Hades' relationship with her. There are moments where she shamelessly says horrible things about Minthe such as suggesting Hades if she can turn Minthe into a hideous beast for his sake. Hera also consistently bad mouths her during family reunions, according to Minthe.

After Hera learns from her visions that Persephone was raped, she meets Apollo in disguised as her then reveals herself after burning his hand. Later on, she laughs and rejects his blessing to marry Persephone by tearing his application and burning it and tells him "No." She is currently gathering evidence against him for hurting Persephone. After meeting with Persephone and confirming her visions, she sets out to destroy the pictures and evidence Apollo took for blackmail which is dealt with thanks to Hephaestus and Aetna in Episodes 142 and 143.

Leto and Hera used to be very close friends, until they had a falling out that "shook the whole kingdom". Although the nature of their falling out is unknown, Hera cast Leto into social exile because of it. There is now major bad blood between the two.

Hebe is the daughter of Hera and Zeus. She often makes her parents drinks in the morning, and Hebe is typically dressed in an outfit that matches Hera's. Hebe is a source of reason for her mother: Hera wonders if Hebe may have more emotional intelligence than she does. Hebe is not afraid to check her parent's behavior, and shows annoyance at both Zeus and Hera when she finds them spying on Hades and Persephone, calling them "perverts."

Ares is the son of Hera and Zeus. They have a close relationship; Ares arrives back on Olympus to protect his mother from Zeus' wrath, showing great anger at Zeus' mistreatment of her. Hera, likewise, is thrilled when Ares returns home. Ares is quick to come to his mother's defense, and is wracked with guilt when he accidentally hits her while fighting Zeus.

Hephaestus is Hera’s first born son, however their relationship seems rather awkward and strained. While Hera does care for Hephaestus, Hephaestus is distant and blunt towards her. However, he tells her that he will think about visiting her and his little sister, Hebe. 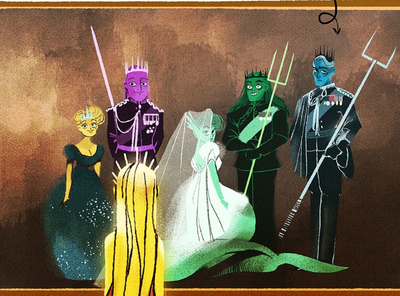 Retrieved from "https://lore-olympus.fandom.com/wiki/Hera?oldid=8241"
Community content is available under CC-BY-SA unless otherwise noted.