Echo is a nymph that was hired by Zeus to be Hera's assistant. She currently works at Hera's office.

Echo has dark, navy blue skin and hair. Her hair is cropped short. Like most nymphs, she has large, pointed ears. In her first appearance, she wears a dark blue blazer over a white, button-up dress and a pair of knee-high, black leather boots. She also wears a pair of earrings that resemble small lightbulbs on strings.

Echo is observant in her surroundings and has good instincts such as quickly interfering Apollo's visit to Hera's office.

When Echo tells Hera that Zeus hired her to be Hera's assistant, Hera tells Echo she doesn't need an assistant and almost fired her on the spot. Seeing how Echo has good instincts in tight situations such as Apollo barging into her office, she tells Echo to stay and take notes. Hera was also impressed with the tea Echo brewed for her because her previous assistants failed on brewing tea properly.

It is revealed in Episode 139 that Echo and Daphne are roommates. When Echo warns Daphne about Apollo's behavior when he barged in Hera's office to apply to marry Persephone, Daphne finds it as a misunderstanding however she kept Echo's warning in mind while heading to her date with Apollo. Echo is protective of Daphne. 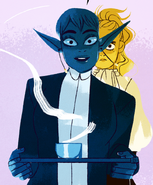 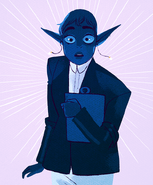 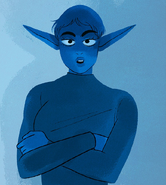 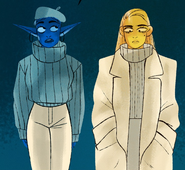 Retrieved from "https://lore-olympus.fandom.com/wiki/Echo?oldid=7379"
Community content is available under CC-BY-SA unless otherwise noted.